The photo challenge themes this week are pets (from Dutch Goes the Photo Tuesday Photo Challenge) and 2017 Favorites (Daily Post). These themes are a perfect pairing.

Athena is a four-year old American bulldog, pitbull mix. Michelle and I first met Athena on a cold, frigid January night in 2014. We had been talking about getting a puppy for several months, but then one night watching football we saw her advertised on Craigslist and drove from Peoria, IL to Champagane-Urbana (a hour-and-a-half drive). That was our first road trip with Athena, but it would not be our last.

Since then Athena has joined us on countless adventures, traversed 30 states, and been a ceaseless source of inspiration for this blog. A normal trip to the lake turns into an epic adventure when told from the dog’s perspective, the first snowfall of the year is always a cause for wind sprints, and she is always finding new discoveries in the world around her.

Needless to say, this blog’s content and my life would be greatly diminished without Athena’s goofy, rambunctious personality behind it. I can only imagine the stories she will create in 2018. But until those stories become reality, here are three of my favorite 2017 Athena inspired tales.

What happens when a dog encounters the snow? Lot’s and lot’s of wind sprints. Here is Athena’s Winter Adventure.

My final favorite is a story still untold. Michelle and I had just started camping and we decided to go to Falls Lake. This would be our third camping trip together and it was sometime in November, which in North Carolina means the days will be warm and the nights chilly. Well, Athena also felt that the weather was too cold and insisted on sleeping inside my sleeping bag. 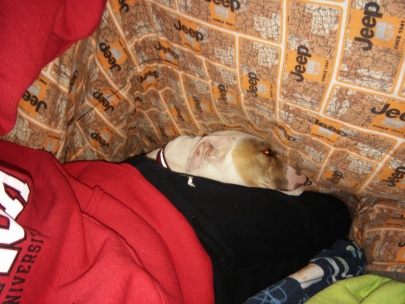 Athena helped keep me warm through the night. 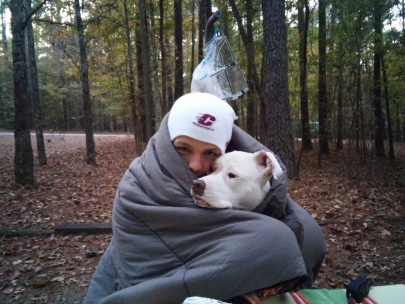 3 thoughts on “A Dog’s Inspiration”